BILLINGS, Mont. – The Brodix Frontier Region of the American Sprint Car Series returns to action this Friday and Saturday with one of its biggest events of the season, the Big Sky 360 Nationals at Big Sky Speedway outside Billings, Montana.

Helena, Montana’s Trever Kirkland has the series points lead and carries a 36-point advantage over Coaldale, Alberta’s Kelly Miller going into this weekend’s events at the 3/10-mile clay oval. Kirkland finished second after leading much of the way in the last ASCS Frontier Region event July 1st at Gallatin Speedway, bouncing back from a major crash he was in when the series visited Big Sky Speedway last month. Kirkland, who has one win this season coming at the season opener at Electric City Speedway, will look to have a better visit to Billings compared to the last one.

Tyler Driever of Meridian, Idaho is the defending winner of the Big Sky 360 Nationals, picking up his first career 360 sprint car victory that evening last year. Driever went on to briefly lead the points, pick up one more victory, and eventually finish second in the 2021 points standings, getting the series Rookie of the Year nod for his efforts. After a difficult start that saw multiple DNF’s and missing a race with a blown motor, a pair of podium finishes has moved Driever back up to seventh in the points and feeling some momentum as he returns to the site of his first victory.

Laurel, Montana’s Phil Dietz, who won the Friday preliminary race at last year’s Big Sky 360 Nationals, won that last ASCS Frontier Region event July 1st at Gallatin Speedway after passing his friend Kirkland for the lead. The five-time sprint car champion was twice a winner at his home track last year and will also be looking for more success at Big Sky Speedway this weekend. 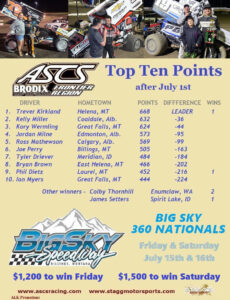 Friday’s event is set to pay $1,200 while Saturday’s Big Sky 360 Nationals finale will pay $1,500. The event, in its third running, was bumped forward a week this year so it would not conflict with the Summer Nationals at Skagit Speedway, allowing ASCS Frontier Region competitors the option to travel to that major west coast 360 sprint car event next weekend if they wish.

Tickets for each night at Big Sky Speedway are $20 for general admission, with seniors and veterans getting in for $15. As always at Big Sky Speedway, kids are 60″ are in for free. Friday’s program will see IMCA modifieds, IMCA sport compacts and WISSOTA street stocks also racing. Saturday’s card will see the ASCS Frontier Region sprint cars joined by the WISSOTA street stocks, WISSOTA midwest modifieds and IMCA sport compacts. Big Sky Speedway is located several miles north of town up U.S. Hwy 87 towards Roundup.